the fight to maintain the character of texas's capital

It’s 11 p.m. on a Tuesday, and I’m with my friend Grace at the closing party for an exhibit at a hostel turned bar/art museum/tattoo studio/thrift store under the highway near downtown Austin. The scene is painfully trendy: loud house music, people wearing sunglasses indoors, and an open bar with four types of exotically flavored tequila to wash it all down. The exhibit, branded as an “immersive art experience,” feels like a glorified Instagram photoshoot. When I catch a glimpse beyond the other guests’ phone cameras and into each room, I see people posing on a throne of fake flowers, a teal piano that doesn’t work, and a neon pink sign that says, “I NEED SPACE.” I like the “black hole room,” a pitch-black closet with stars projected onto the ceiling. It’s empty in here—too dark for pictures.

I leave the closet and strike up a conversation with the glitterati waiting to take photos in front of an indoor tree. They’ve all moved to Austin from L.A. and can’t believe how much nicer everyone is here. But they’re not: one girl asks me how I “got on the list,” and another one slaps me with her fan when she thinks I’m cutting her in line at the bar. I show her the drink already in my hand, smile passive aggressively, and decide I’m ready to leave.

This wasn’t the scene I expected in Austin. My aunt and uncle, who lived here until the mid 2000s, used to gush over how the city somehow combined Texan pride with laidback, live-and-let-live liberalism. Most importantly, they’d insist that Austin held onto its small-town, artistic roots even as it transformed into a national tech hub.

Austin’s history supports its image as a counterculture hot spot. Local author and historian Joe Nick Patoski explains in an interview with Texas Highways Magazine that Austin became a music capital when Willie Nelson and other musicians fled Nashville’s “corporate” country music scene in the early ‘70s. The city started attracting people “who wanted to make music, not necessarily build a career.” Patoski pinpoints this influx of artists and their anti-establishment attitudes as the beginning of the “Alternative Austin Business Model”: people making things for the sake of creativity, not profit or, now, Instagram followers.

At the same time, Austin’s politics shifted, too. In 1971, the 26th Amendment lowered the national voting age to 18. The college town’s voting population rapidly expanded as student-run social justice coalitions sprung up, and people of color got elected to City Council for the first time. By the mid ‘70s, the city had elected a “hippie City Council,” led by former campus activist Jeff Friedman, who rose to the mayor’s office in 1975 at the age of 30. Austin’s radicals and its establishment began to merge, paving the way for its reputation as a counterculture capital.

I’ve seen how Austin’s ‘70s legacy resonates throughout the city today. Local and touring musicians perform here every night of the week at over 250 venues, more per capita than any other city in the U.S. And every year, nearly one million people flock to the city for the Austin City Limits Music Festival and the South by Southwest film, music, and technology festival. Austin votes blue, and with its many advocacy groups, gay bars, and cultural heritage events, it seems like a liberal, accepting place.

The city’s unofficial slogan, “Keep Austin Weird” (KAW), reflects its disdain for societal norms. At first glance, it just makes sense; there are plenty of “weird” places around Austin that reflect its idiosyncratic culture. Thirty minutes west of downtown, for example, lies Hippie Hollow, Texas’s only clothing-optional public park. I visited on a crowded Sunday and tried to maintain eye contact with an older man who chatted with me about the weather while he watered tulips in the nude. Watching him greet the other visitors made me realize that I stood out not just as the only person wearing pants but also as an unfamiliar face; he and the other regulars, identifiable by their lack of tan lines, all knew each other. Passing a man wearing only a Stetson hat as I walked to my car, I thought about how you could only find a community like this here in Austin, where nudists look like cowboys. KAW still resonates; this city is weird, and proud of it.

This offbeat, anti-establishment attitude motivates Austin’s love for local businesses. In fact, KAW began as a protest slogan against big box stores. Journalists Elizabeth Devitt and Juli Berwald recount how Steve Bercu, owner of the local bookstore, BookPeople, adopted the phrase from librarian Red Wassenich as a rallying cry against the Borders store opening down the street. Bercu and other business owners printed bumper stickers encouraging locals to “KEEP AUSTIN WEIRD,” with their logos at the bottom. “The point was to support local businesses,” Bercu explains. “Everyone got it immediately.” Soon, Borders withdrew plans to open the store.

Some Austinites argue that nowadays, KAW has lost its authenticity. Along the South Congress tourist strip, visitors peruse tie-dye T-shirts, beer koozies, and keychains plastered with the phrase, now trademarked by the company Absolutely Austin. On their anonymous, lo-fi site, the creators of KAW complain that these tchotchkes and marketing campaigns point out the “boring irony” of the movement today: Absolutely Austin’s oversized mugs that say “Keep Austin Weird: Support Local Businesses” are made in China, not locally. Trademarking the slogan, KAW’s creators argue, is “sad proof that commercialism is winning.” These diehard individualists see KAW today as a glorified marketing strategy rather than a genuine effort to highlight the city’s grassroots weirdness.

But it’s a popular strategy nonetheless. “Despite its countercultural bona fides,” Devitt and Berwald write, “weird has economic power.” Since KAW’s inception, places such as Denver and Portland have launched similar campaigns. Many of these cities are state capitals and most have strong artistic communities. Importantly, Devitt and Berwald say, they all have a “grassroots urge” to maintain their unique identities amid rapid population growth. Ironically, the image drawing people to Austin every year is the very thing jeopardizing it.

As more and more people move here, artists and musicians rely on KAW as a phrase of economic necessity. Housing prices are skyrocketing, pushing out many of the creatives who make this city so great. John Kunz, owner of Austin’s Waterloo Records music store, has worked to confront this mass exodus since 2005. He founded the Health Alliance for Austin Musicians (HAAM), which makes affordable healthcare accessible to the city’s low-income musicians. In the past five years, HAAM’s membership has grown to nearly 3,000, reflecting Austin’s rapidly increasing cost of living. “Doing things because they’re cool, and not to make money,” like Patoski wanted, doesn’t cut it anymore.

It’s difficult to say, then, how much KAW protects or threatens Austin’s weirdness. The city’s image as a bohemian, tolerant place certainly misleads, though, with regards to economic equity and racial justice. Segregation in Austin predates its counterculture reputation: a press release from the City of Austin African American Quality of Life Initiative details the city’s 1928 plan of “urban renewal,” which drove African Americans and Hispanics to East Austin so that white families could take advantage of the west side’s green spaces and better infrastructure.

The city remains segregated, and historically Black and Latino neighborhoods now face increasing gentrification, forcing many people of color to leave the city entirely. Local government reflects Austin’s overwhelming whiteness: the City Council has made little racial progress since 1971, when it “informally agreed” to hold one seat each for Latino and Black members. Since then, neither group has held more seats. And recent pushes by voters to increase police funding and criminalize homelessness further contradict the capital’s mythic image as a “drop of blue in a sea of red.”

Outside the closing party downtown, I think about how Austin’s reputation conceals the ongoing segregation, exploding housing costs, and displacement happening here. In the face of these challenges, it’s time for KAW to evolve, for the city to embrace not just local businesses but specifically BIPOC and Latinx ones. Standing under the highway that divides Central and rapidly gentrifying East Austin, the need for this change, and the activists demanding it, become impossible to ignore.

Before I take out my phone to call a ride home, Grace pulls me back inside. There’s one more person she wants me to meet. I reluctantly walk back to the dance floor and see a man with curly, bright red hair, a floral button down, and a terrible sunburn. His name is Sean, but he goes by Farmer Peppy, and he spends the next 20 minutes talking to me about his tech startup and the vision that inspired him to start an urban goat farm on the outskirts of town. He hosts goat yoga classes every weekend with doom metal music, which he claims “embodies the spirit” of current Austin music. Basically, attendees do yoga while the goats climb on them and men with intense beards and eyeliner thrash on their guitars in the background. Pretty weird.

Farmer Peppy doesn’t care about the fancy people from L.A. or how I got on the list tonight. He came to dance, he says, and he’s about to continue the party at a neighboring gay bar. Grace and I hitch a ride, and ten minutes later we’re flying through the street in the bed of Peppy’s turquoise Ford pickup truck, which he’s filled with hay for the goats. We pass by the high-rises and cranes downtown, and I wedge my legs between two bales of hay so I don’t go tumbling out.

At the club, I hear the bass reverberate from the street. Inside, two men dance together in boots, cowboy hats, and clear vinyl pants with rainbow piping down the legs. There’s no list, just dance music, cheap drinks, and people having a good time. I remember the L.A. transplants at the party and feel that now, at the end of the night, I’ve finally arrived at the creative, weird Austin ideal that my aunt and uncle told me about years ago. Hopefully, it will survive, and this generation of Austinites will demand a new version of “weird” that celebrates the city’s diverse artists and culture. 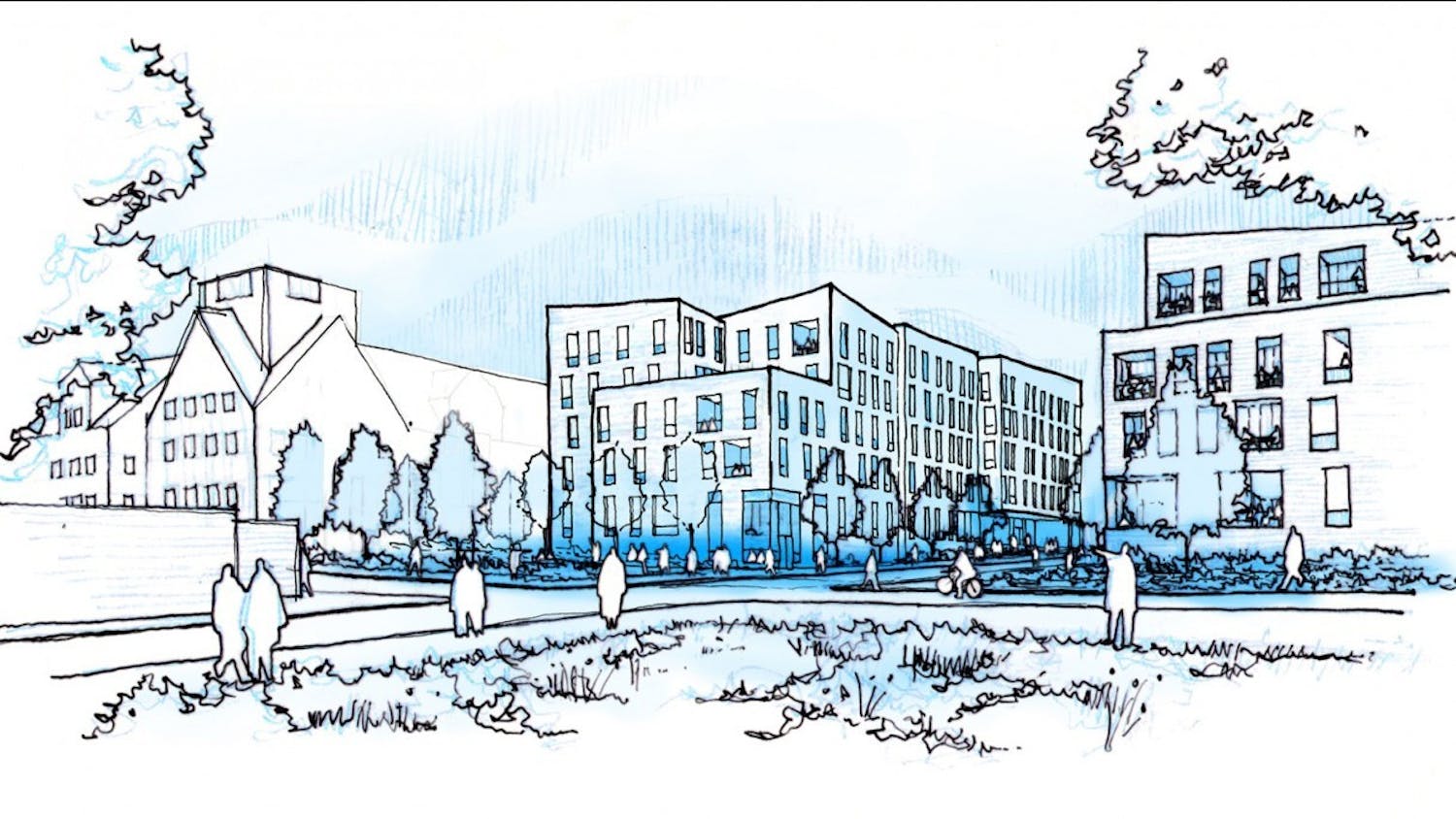