the lost daughter, from across the gulf

I’ve been told movies on airplanes always make you cry. And so I guess I’m willing to concede the possibility: It was just the airplane.

It might have just been the airplane because no one I’ve talked to, no one my age at least, has really loved The Lost Daughter. To be fair, it’s not a fun movie to watch.

I queued it up this winter break mostly because I thought I was supposed to see it, the way we were all supposed to see The Queen’s Gambit last year. It’s a supersize serving of smart female stardom: Olivia Colman and Jessie Buckley acting, with Maggie Gyllenhal as director, and adapted from an Elena Ferrante novel of the same name—it had to be good!

For a hundred minutes, I watched The Lost Daughter mostly unmoved, sipping ginger ale under my mask and vaguely admiring the cinematography. I registered a mild sense of dread as angry people and sharp objects fell into view: a clear lead-up to an inevitable act of violence. And then, at minute 110 or so (spoiler incoming) our protagonist, Leda, gets stabbed with a hat pin.

I usually only cry at the end of movies, but typically with about forty minutes of warning: the lump in your throat, the tension in your knuckles and the balls of your feet. Here there was none of that. Just two hands flying to my mouth, and then waterworks. I didn’t want her to die.

There is some ambiguity as to whether she does. Leda, the middle-aged, academic protagonist on a vacation to Greece, drives her car to a darkened beach and collapses near the water. In the last scene, it’s dawn; she sits up, she calls her daughters, she peels an orange. Is it real? A dream? The afterlife?

I discussed these possibilities with my friend Sophie over break, waiting for my building elevator. “I hope she lives!”

“Really?” She raised her eyebrows. “I don’t care. She’s horrible.”

I felt something in me rise to Leda’s defense. “No, she’s not.”

“What are you talking about?” Sophie is forthcoming in her convictions about Art; this is something I have gradually learned to appreciate about her. “She’s a terrible mother.”

I didn’t know what to say to that.

Sophie’s right, of course; Leda is a terrible mother. There’s no debating it. The movie and the novel are both crammed with wrenching interactions between a frustrated, spiraling Leda and her two young children, Bianca and Marta. She throws her daughter’s doll out the window. She slams doors and breaks glass. She screams at Bianca when the girl cuts her finger attempting an affectionate gesture, and withholds the begged-for kiss that would cure all. Most of all, though, she leaves.

This desertion, of course, is what cements her status as a bad mother—not the transient physical violence she inflicts upon her children nor the fits of proximate rage. In the novel we learn that Leda’s mother was similarly volatile, but “she never left us, despite crying that she would.”

Let’s not contest that abandonment is among the ultimate maternal sins, but let’s think a little more about what this judgment implies. Leda distances herself from her children in order to gain, or regain, self-definition: to become her own self. “I was another person,” she says. She was “finally the real one.”

Leda struggles to explain her choices, first to herself and then to Nina, the young mother with whom she becomes fascinated and entangled. “I loved [my daughters] too much and it seemed to me that love for them would keep me from becoming myself,” she says in the novel. In other moments she is more blunt. “How foolish to think you can tell your children about yourself before they’re at least fifty. To ask to be seen by them as a person and not as a function.”

Leda observes a similar dynamic between Nina and her daughter Elena. Nina “seemed deaf and blind,” she says; “she seemed to have no desire for anything but her child.” But all the more chilling is the way that motherhood, and its defining, consuming potency, reaches beyond the mother herself to touch daughters, too. Ferrante describes Elena’s passionate care for her doll, whose role as a symbolic daughter to the child is cemented when Elena and then the doll get lost in sequence. Both crises spur comparable levels of panic, mobilization, and general systems failure. For those who haven’t seen the movie, it bears mentioning that this latter event—the loss of the doll—is Leda’s fault.

Motherhood is not only all-consuming at an abstract or passive level. Motherhood is work. There is a little caveat in the capitalist insistence that you are what you do; that is, you are your paid work. For women, you are your unpaid work, and paid work ought to be secondary. We ask women to strike a “work-life balance” where a large part of  “life” is also labor. So society inflicts extra violence: The work of motherhood defines and consumes you, yet we refuse to call it what it is.

In the novel, Ferrante draws parallels between Leda’s relationship to her students at university, and to her daughters at home: Leda is better at her job—in a way, a better “mother” to her students—when she’s not also engaged in mothering her own children. But while both motherhood and teaching are work, only one is character-defining. Mistakes in the workplace are forgivable. Mistakes at home, for mothers, are not.

“She’s a terrible mother,” Sophie had said, and I had agreed. But I think what Sophie meant to say, her subtext, was this: She’s a terrible person. Because if motherhood is everything, if it is all-consuming, then a bad mother is not just bad at her job—she is bad at being.

In movies and books, bad people get punished. I think this is the core of the frustration I’ve heard expressed, by friends and critics, about The Lost Daughter. A Brown Daily Herald review says as much: The movie “lets its deal with its audience go unfulfilled.” There’s not enough action: We expect some “terrible harm” to come to Leda, but “no serious emotional consequences materialize.”

I wouldn’t go so far as to say that there are no serious emotional consequences (recall: waterworks) but the reviewer has a point: There are no gunshots, no sword fights, no death. The protagonist’s survival is even clearer in the novel, which opens with Leda in a hospital bed, recovering easily from an “inexplicable lesion” in her side. The ambiguity in Gyllenhal’s ending lets viewers project their desires onto the screen. Should she have died, or not? But I like Ferrante’s approach. She doesn’t die. The expected punishment is withheld. Leda is a terrible mother, yes—but does she have to be a terrible person?

Leda carries with her a horrible error, colored and compounded by scenes that increase our hatred of her. I don’t feel unjustified in disliking this protagonist. But, to quote Leda’s defense, “What had I done that was so terrible, in the end? Years earlier, I had been a girl who felt lost, this was true.” Leda leaves her children with their father; three years later, she comes back. Years after that, she steals a doll. She may be unlikable, even selfish, even morally corrupt, but death should not be the punishment for unlikability. Likability is not only a biased standard, but the stakes of its judgment are also inconceivably higher for women. Ferrante refuses to do what writers, filmmakers and real people have done for centuries: She does not punish Leda gravely for her small sins.

Here I am on an airplane, watching The Lost Daughter at 30,000 feet. I’m not a mother yet; I am just guessing and inferring and conjecturing.

But that matters, the distance I feel from Leda. It speaks to the totality of her transition into motherhood, and the impossibility of knowing what’s on the other side if you’ve never experienced it before. Motherhood is you, whether it suits you or not—or at least, if that’s what many will believe—and I don’t yet know if it suits me. No one can know; some of us have a stronger hunch than others, but that’s it.

Watching the movie gave me a sense of alienation, yes, but also a sense of identification. I think about the young Elena, in her dedicated care for her mother, Nina, and her doll; I wonder how motherhood has already reached out and touched me before I’ve gotten there. Maybe it was just the airplane. The hat pin dives into Leda’s side, the plane begins its descent, and the ropes have already been cast across the gulf between me and her. 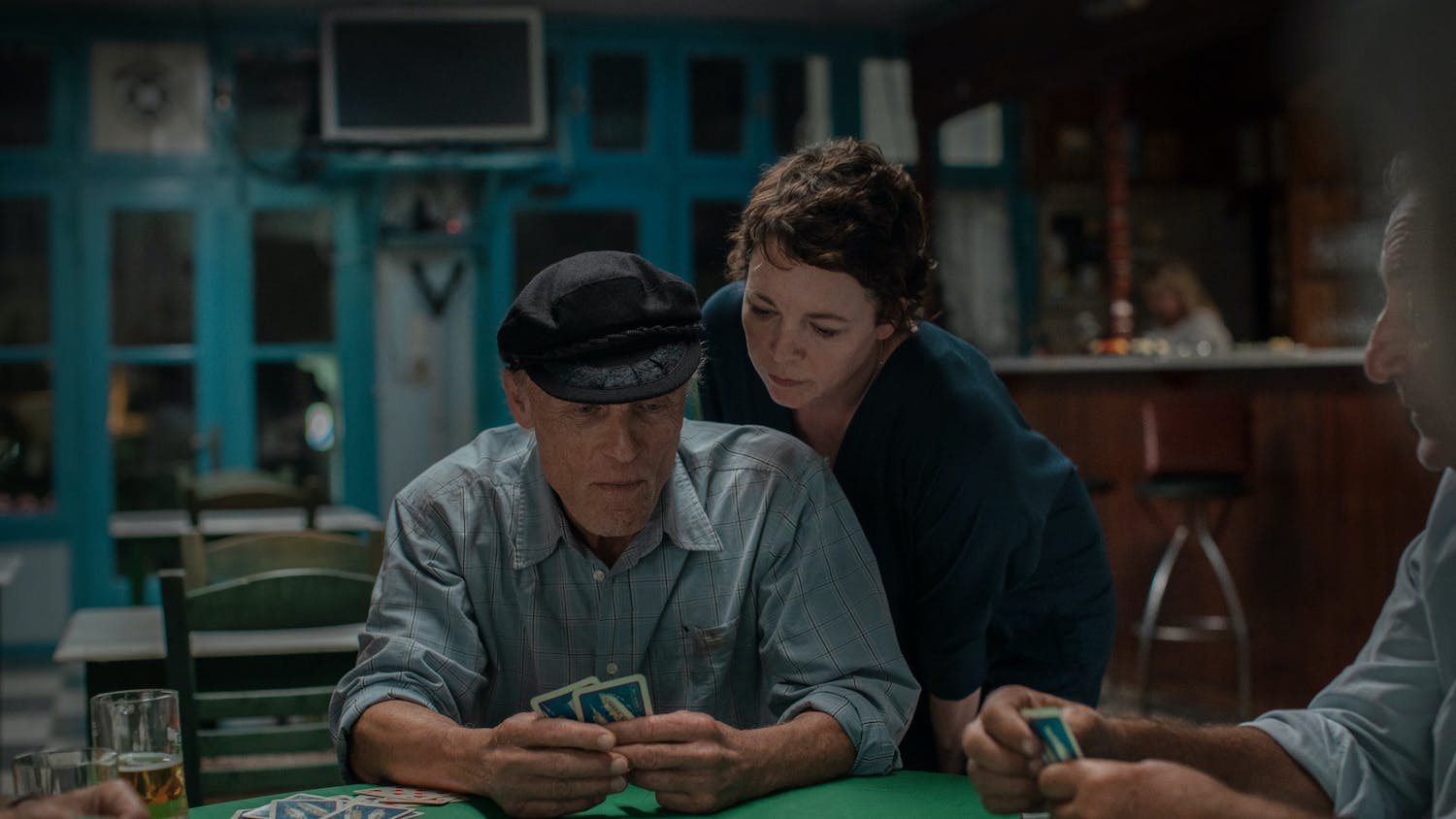