politicization and polarization on and off campus

Before Brown, my only sense of community was the political vacuum that is the Rio Grande Valley (RGV). With 94% of students being of Hispanic descent/predominantly children of immigrants, schools having some of the worst history curricula in the country, and existing in one of the most corrupt regions within the United States, the RGV operates as a sort of political island. The discourse on American politics is like a foreigner’s punchline on the US’s latest blunder, such as how ridiculous Trump's wall is, despite how it’s something literally happening in RGV residents’ backyards. Not only that, but my former school district, Sharyland ISD, just so happens to be a previously white-only school. Although the district now reflects the rest of the RGV in ethnic makeup, the oppressive, xenophobic, and white supremacist structures in our education still linger—particularly when it comes to conversations about race and, most notably, sexual assaults.

In short, conversations at home are nothing like those at Brown. The start of my undergraduate education was a rude awakening. I felt like I was cast into an alien environment, and I quickly discovered I was struggling to engage with others. I lacked the cultural capital needed to navigate the politically and intellectually layered conversations that happen here.

An emblematic example of this happened during the first couple weeks of classes my freshman year. A group of fellow freshmen that I had met during orientation gathered to get to know each other over some 6 o’clock Jo’s. The topic of the 2016 election eventually came up, and I mentioned how I was entirely out of the loop on substantial political news before coming to Brown. I was candid enough to mention that, had I been 18 at the time, I don’t think I would've voted at all. People rolled their eyes, saying that it was clear what kind of person Trump was. I retorted that I had heard a lot of terrible things about Hillary Clinton too, and it quickly got awkward. The others exchanged wide-eyed looks. Had I said something wrong by being honest?

I felt my attempts to be vulnerable when trying to make friends and form genuine connections were demonized. Small instances like these made me feel looked down on for questioning what were intuitive social no-no’s to everyone else. I felt pressured to bow my head and accept that the gaps in my logic were either my fault or just annoyingly hair-splitting, “problematic” takes. I became socially anxious, depressed, and extremely bitter; I struggled to make sense of things. Slowly, however, I began to notice that many around me were just as confused as I was. Rather than owning their misunderstandings, they would shallowly cloak their ignorance in liberal “woke” culture. Isolated, I started to identify with counter-cultural views that toxically reinforced my ego and began my formal introduction to right wing views.

It was official. I was undergoing Shapirofication. It’s embarrassing, really, but the truth was I did not have tools to navigate an environment that, in my view, constantly shamed me for my well-meaning curiosity. It fueled my reactive nod-alongs to those claiming diversity of thought was in jeopardy in American universities, and soon the post-2016 algorithms had me in their grips. I was stuck—trying to orient myself in this unfamiliar environment based on opinions from “thinkers” online who were only interested in validating my ego for clicks. Although the “Jordan Peterson DESTROYS college virtue-signaling liberal” videos did help my bruised ego at the time, it subconsciously chafed with my values of humility and compassion. I would lock my phone and close my eyes, still very distressed and even more culturally isolated. It was the lowest level of “logic.”

It was not until sophomore fall, when a friend from back home put together an intro to philosophy playlist on YouTube, that I felt like I had the groundwork to begin assessing issues and critically engage for myself. My newfound lens shifted to actual politicians when I was alone in my sophomore summer dormitory, sitting crossed legged on my mattress, eating a pain au chocolat in front of my obtusely opened laptop. I was, for the first time ever, watching a presidential debate. I heard Bernie Sanders champion complete student debt relief and many other candidates followed suit. I looked up from my recently split croissant, one frayed piece of bread pinched in each claw, and my spirit lifted. A clench I didn’t even know I was carrying in my chest relaxed. It was truly like I injected life straight into my veins.

The relief I felt was so real, but it quickly decayed to guilt. I felt borderline disgusted to feel so revived by a policy proposal that would ultimately compound my Ivy League privilege. I began to revisit old conversations in which I slammed down an idea that potentially meant a lot to so many.

I eventually was able to identify the emotion I experienced when I heard Bernie Sanders’s recognition of my pain, an emotion which in itself is a privilege: I felt hope.

After that summer, I decided to take a year off for medical leave—partly because I felt like my college experience was slipping away from me, partly because my anxious avoidant and depressed self didn't submit my FAFSA, and partly because my brain was not about to go back to Brown after having the worst semester of my life.

My first semester back home blurred into 2020. In January, a “scandal” embroiled my former school district. Allegations on Twitter about the principal’s son’s involvement in a “hazing incident gone too far” and a nepotistic cover-up festered until it exploded. Outcries from former students and parents flooded social media; everyone was disgusted enough by the story to be shocked out of their silence.

I attended the board meeting that followed. The auditorium was filled to the brim—a strong contrast from the usually sparsely seated monthly board meeting. It just so happened that I sat behind a girl around my age who had her own personal motivations for attending. She said she was going to plan a march to raise awareness for the systemic silencing of sexual assault victims at Sharyland, and when she asked for my help, I couldn’t say no.

The march was a success, with many speakers sharing gut-wrenching testimonies. Media packed the local park’s pavilion, cameras fanned and pointed to the podium in the center. Around 80 community members attended, including complete strangers from up to six hours away. It was such a powerful moment of solidarity with community pride and a shared sense of struggle towards a common goal at the center. This was engaging in politics in a way that mattered to me. Helping my community and seeing their gratitude towards my compassion reminded me of who I was—someone I had lost sight of while isolated with my phone and too much weed at Brown. This newfound community solidarity grounded me.

However, the school district stonewalled us. They said absolutely nothing in response. I began to understand how callous this culture at home forced me to be. With immigrant parents and a high school environment that normalized heinous behavior, how could I blame myself for my political ignorance? I realized that it was a privilege that my Brown education forced me into uncomfortable learning environments and conversations, not brainwashing like I’d once thought it was.

Through my advocacy, I was able to revisit and process so much of my highly controlled education and time within Sharyland ISD. I felt less dysphoria, and with student debt still peering over my shoulder, I felt it was time to continue my education. I went back to Brown with a reassured sense of self.

Continuing the fight for my community

During my return, an anonymous Facebook profile started to post about “Sharyland ISD happenings,” essentially airing the school district’s dirty laundry. It was at the height of the spring semester with my academics, social life, and mental health collapsing in on itself that I learned of a cease and desist addressed to me at my home address via a Whatsapp message from my father. In it, two Sharyland board members accused me of running this Facebook page and to cease and desist from defaming their character through it.

At this point, going back home was necessary if I wanted to salvage any sense of my future and mental well-being. I was served with the lawsuit and managed to find a lawyer. I issued my motion to dismiss based on the hollowness of the lawsuit, but the judge failed to deliver a decision within the proper time frame and now my lawsuit stands in the 13th court of appeals in Texas.

All this has led me to take yet another medical leave this semester. In my spare time, I have been diligently (and consensually) compiling and reposting already public testimonies: The Instagram @rgvtestimonies organizes just a fraction of stories of sexual assault and harassment or neglect coming out of my school district. I am also still foregoing my education in order to deal with this lawsuit. I made this decision because to me, the ultimate purpose of my Brown education is to be able to give back to the community I came from, no matter its difficult problems.

Since finding a community and discovering value in communal struggle, I’ve been increasingly motivated to understand local, national, and global politics, with an emphasis on social psychology. It is enlightening to be able to understand nuances within ignorance and potentially see a Trump supporter for what they are—a fellow working person lacking the cultural capital needed to navigate a culturally foreign liberal media—rather than an enemy.

It is ultimately because of my difficult time at Brown and the rediscovery of myself by my community at home that I truly understand the road I was heading down—a completely different road that I am currently on. Moreover, I believe my growth away from my short-lived Shapirofication era equipped me with the nuanced understanding of the real life danger that bias and partisanship can usher—a skill I can be proud of and use for good. 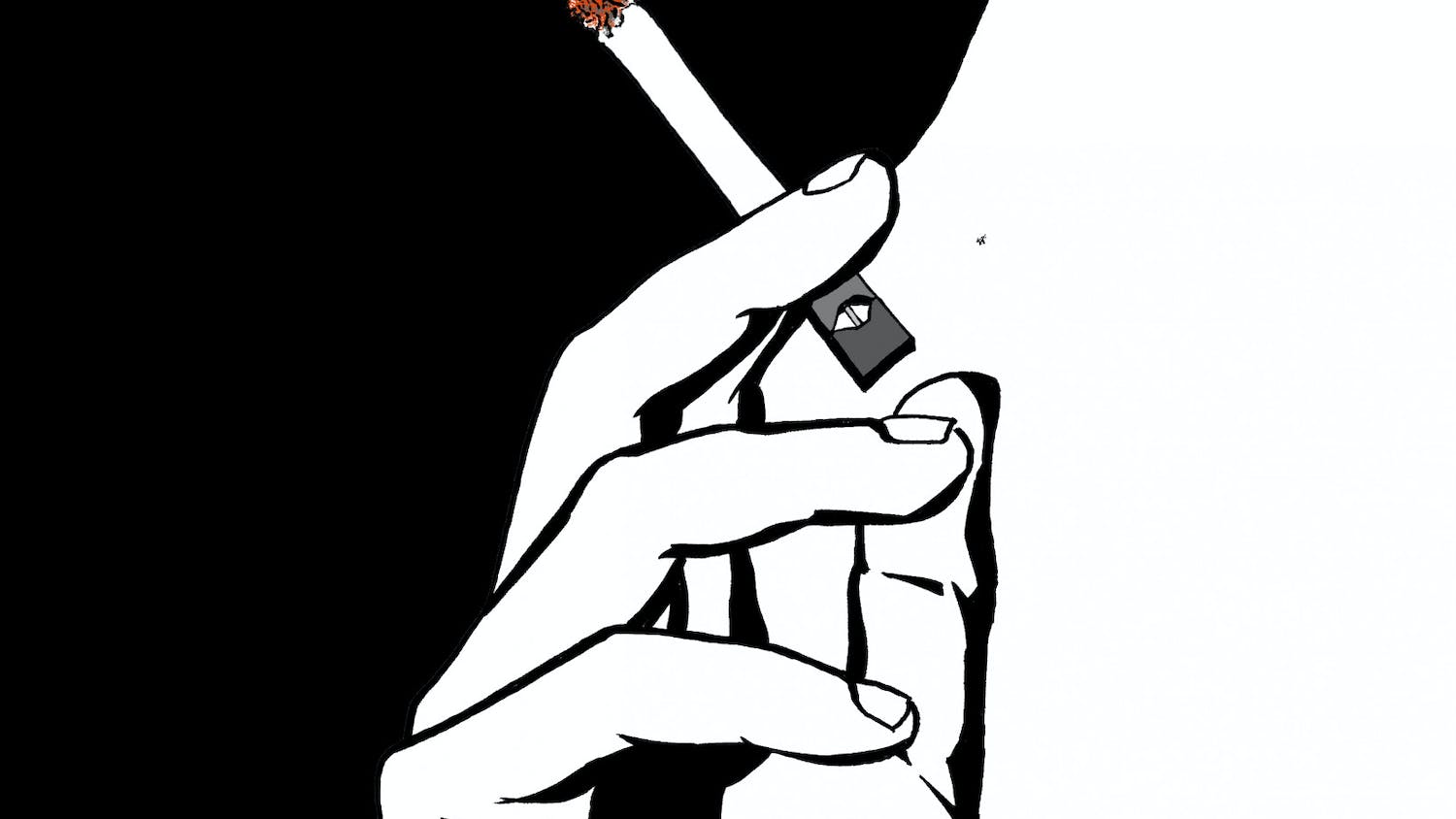 Study challenges concern of e-cigarette use in high school students