The formerly vacant rooms of Andrews House, which were left empty when the University’s health services office moved to the Wellness Center and Residence Hall, are once again full of life. The various pharmacy, storage and office rooms in the building are now occupied by countless racks of colorful costumes from the Rites and Reason Theatre, the eclectic furniture that formerly sat in Churchill House and boxes upon boxes labeled “archives.”

For the next academic year, Andrews House will be the base of operations for the Department of Africana Studies and the Rites and Reason Theatre, as Churchill House, the department’s permanent home, undergoes renovations, The Herald previously reported.

Construction on Churchill House began in July and is expected to be completed by August 2023, The Herald previously reported.

The renovations will update the electrical systems and technical equipment in the building’s George Houston Bass Performing Arts Space, establish a building-wide communications system with the green and costume rooms and add an elevator for accessibility purposes, said Alonzo Jones, technical director and manager of the theater.

Jones has been the primary contact at the theater for Churchill House’s renovation planners and construction staff, he said. In the spring, he sat on the working group that determined what sort of updates the building would require and now he advises renovations in a consultant role.

Churchill House “is very different from a lot of spaces that the architects and construction workers have worked with,” Jones said, referencing the unique procedures that come with renovating a major theater space. “It’s been a whole year of trying to get a lot of people to understand how we actually function in a theater.”

While everyone has been understanding and is trying to accommodate the theater’s needs, there is always a bit of a disconnect, he added.

A move across campus

While Rites and Reason and the rest of the Department of Africana Studies wait for renovations to wrap up, the University has relocated them to Andrews House.

Packing up Churchill House “was a feat,” said Kathy Moyer, stage and production manager at the theater. While every member of the Africana Studies department was tasked with moving their private offices, there were many rooms in the building that were unaccounted for. It fell on Moyer and other staff members to go through the theater artifacts and do “a lot of weeding and purging,” organizing what was going to be put into long-term storage and what would have to be relocated to Andrews House.

Physically moving materials to the new building posed its own unique set of challenges, as University movers did not have a lot of experience with moving professional theater equipment, Jones said. The move ended up being a community effort, with departmental faculty, staff and students all coming together to help.

“There was also a psychological component to being disrupted and relocated,” said Elmo Terry-Morgan ’74, associate professor of Africana Studies and Theater Arts and Performance Studies.

Terry-Morgan, Rites and Reason’s artistic director, felt that the department’s move from the center of Brown’s community to its “outskirts” fell in line with the focus of the theater’s current artistic productions. This includes the ongoing Providence Garden Blues project, a performance that focuses on the thriving middle-class Black community around the University campus that was displaced following World War II because of urban renewal.

“It dawned on me how emotionally impacted I was just to move across campus,” he said, “and what it must have been like to be uprooted from your continent, your home, your village (and) your family and be taken somewhere you don’t know.”

The physical location of Churchill House has posed logistical problems for the department, including the lack of available parking around the building, Terry-Morgan said. Many students are also unaware of where the department has moved, which has diminished Churchill House’s formerly vibrant community.

“It’s a ghost town around here most of the time,” Terry-Morgan said. At Churchill House, he would always see students walking in and out because of the various classes and performances going on in the space. To remedy this absence of community, the department is planning to host various events throughout the semester such as the welcome-back event held earlier this fall.

Rites and Reason “is very communal, and it’s hard to be like that here,” Terry-Morgan said. “We have to make sure that, while we’re here, (Andrews House) becomes a destination.”

Both Terry-Morgan and Moyer look forward to when they are able to return to Churchill House and the Department of Africana Studies can be reunited, as the renovations will also add more office spaces for departmental faculty and staff to the building.

In the meantime, the department was able to hold its annual commencement celebration at the end of spring semester before temporarily closing the doors of Churchill House.

“Saying goodbye to Churchill House as we knew it was really difficult,” Moyer said. “It was truly the last thing that was familiar post-COVID. … It took me a whole year to really come to terms with the fact that things will never be the way they were before and to be okay with it.”

“The commencement and moving out was really symbolic,” she added. “I hope that the people who attended and participated saw it as a joyful event.”

Institutionalizing the past, looking forward

For Terry-Morgan, moving out of Churchill House meant saying goodbye to an office he had been in for decades. He plans to retire from his role at the University at the end of June 2023, meaning he will not be able to enjoy the renovated Churchill House to its full capacity.

“He’s retiring against our will,” Moyer said jokingly. The theater is currently searching for a new artistic director and events and production manager, who will come in to fill the shoes of Terry-Morgan and Karen Allen Baxter, the theater’s former senior managing director who left her role at the end of 2020.

Terry-Morgan plans to continue working with Rites and Reason in a reduced capacity, but he is dedicated to “anchoring and institutionalizing” his knowledge of the theater over the next year. He and Moyer are currently collaborating with the John Hay Library to create an “online research archival museum” of the theater’s history, he explained.

Terry-Morgan also wants to start new creative projects with Rites and Reason which will set in place certain programming for future semesters while also leaving space for the new artistic director's vision. The theater is currently working in collaboration with the Rhode Island School of Design to put on a performance adaptation of “Afro Fantasia: Journey of Ayanu,” a short novel by Jason Tristan Brown ’23.

The production is currently in its research and development stage and will be the first part of a larger project, which Brown will have the option to continue with either Rites and Reason or another theater, Terry-Morgan said.

The show will be put on at The Perry and Marty Granoff Center for the Arts, which is a vastly different space from Churchill BassPAS.

“The Granoff is a clean space,” said Jones, which means certain production protocols like set construction have to be done externally and then be brought into the space. Additionally, more people have to be involved in the production, putting the burden on theater staff like Moyer to connect contacts at the Granoff with artists.

“The small productions that we are doing this semester are going to be a good dry run” to see what a bigger project can look like at the Granoff, Moyer said. Earlier this semester, the theater held a performance of “THIS HOUSE,” an opera about the gentrification of Harlem from playwrights Lynn Nottage ’86 and Ruby Aiyo Gerber ’21.

The people at the Granoff “have been really generous and kind,” Jones said. “We work together well.”

The staff at Rites and Reason is also considering new ways to get involved with the broader Providence community. Jones and Moyer are currently working with Everett: Company, Stage and School, a “multi-disciplinary performance arts incubator” located in Providence. The company will premiere “Bliss Body,” an hour-long dance and theater piece that “considers peace and struggle (and) asks how we find bliss in today’s world,” at the Granoff on Nov. 18 and 19.

“We’re venturing out more into working with our community,” Terry-Morgan said. The theater wants to open its resources to the rest of Providence while considering what it can learn from community organizations.

Rites and Reason does not want to approach its community work with “this historical, elitist sense of … we leave the ivory tower and go into the community (thinking of ourselves) as the smartest kid in the room,” Terry-Morgan said. “The goal is to say that we are all part of the same family of humanity. What can you teach us? What can we teach you? How can we share?” 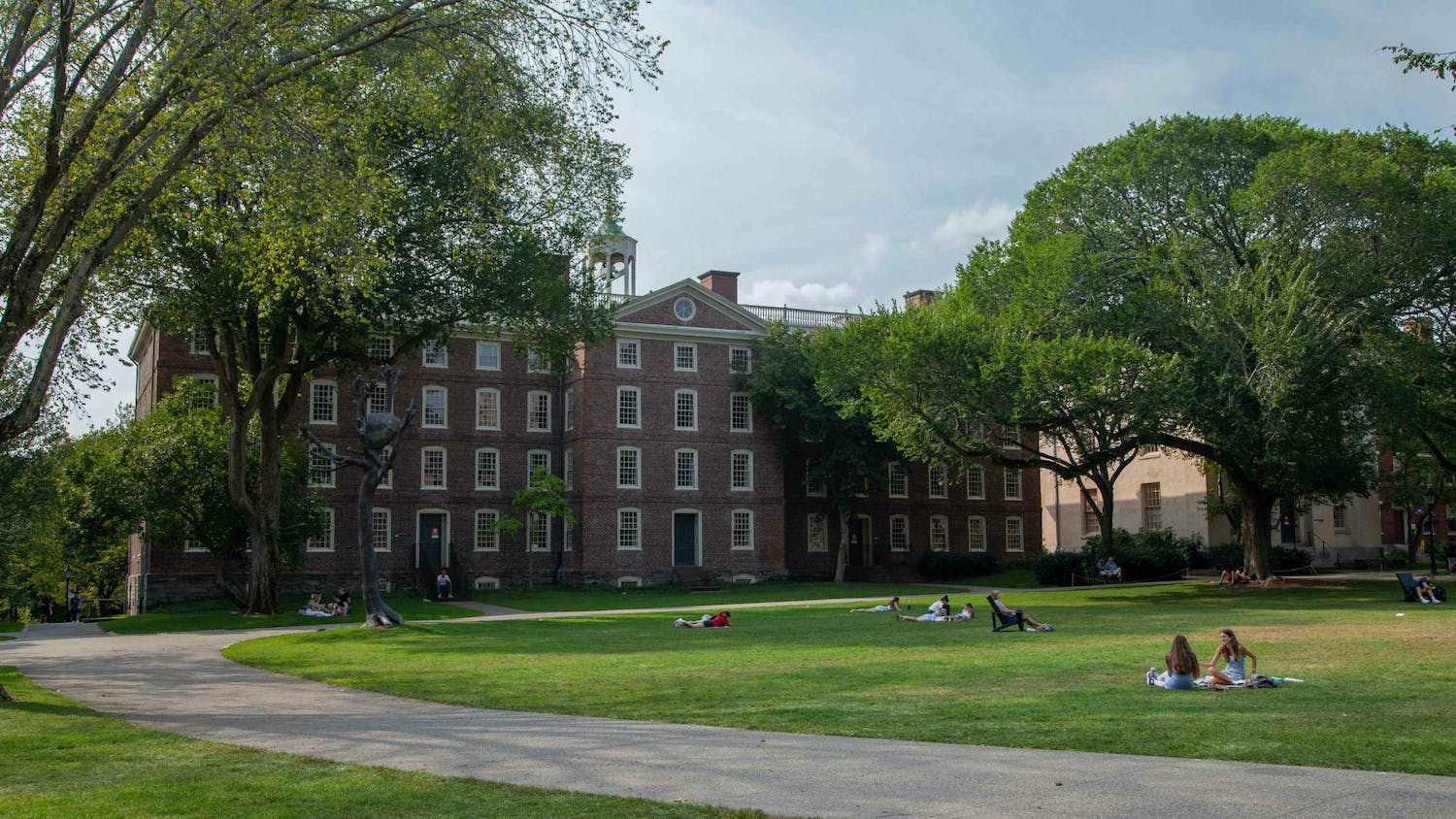 Faculty vote in favor of establishing new Center for Philosophy, Politics and Economics