‘We as a people are tired of moving’: Lippitt Hill and the displacement of non-white communities in Providence

The shopping center near the University Heights apartments just south of the Mount Hope neighborhood of Providence looks like any other. A Whole Foods, McDonald’s, Petco and Staples make for a somewhat unremarkable shopping strip that University students sometimes visit to run errands or buy groceries.

Over 60 years ago, residential homes filled those same streets around the complex. “A predominantly African American and Cape Verdean population lived harmoniously with Jewish, Polish and Italian residents in a neighborhood that dates back to the freed slaves of the Brown family,” according to the website for Stages of Freedom, a local nonprofit which documented the history of the neighborhood in 2017. “In this idyllic setting, families flourished, block parties brought people together, vigilant parents kept an eye on each other's children, lively retail shops bustled and life-long friendships were formed.”

This neighborhood was roughly 30 acres and was called Lippitt Hill, but residents called it by a different name.

But in April 1959, residents received pamphlets at their door from the Providence Redevelopment Agency, which was part of the city government. They said that the Lippitt Hill area was to be purchased by the agency for redevelopment.

“It will be torn down to make room for new private housing and other facilities to be built in the proposed Lippitt Hill Urban Renewal Area,” the pamphlets read. “This means that at a later date you must find a new home.”

Starting about one year later, these residents were moved out to make way for demolition and urban renewal, the Providence Journal reported Nov. 19, 1959.

The community that once was

In 2017, Ray Rickman, executive director of Stages of Freedom, conducted oral histories with people that had lived in Lippitt Hill. “They were in a joyous mood,” he said of the East Siders who were on the panel. The project was completed in two parts.

Rickman said residents often faced discrimination when working with landlords, making it difficult to get structural issues in their homes resolved. Despite these issues, Rickman explained, the Lippitt Hill community was “not an unhappy lot.”

“People went to church,” Rickman said of Lippitt Hill residents. “There were a lot of nice things going on, separate from your house falling down.”

“Our house … would’ve been where today the Starbucks is” today, said Sylvia Ann Soares, a participant in the oral history project, in 2017. “Who knows what’s going to be there later?”

“It was a very strong community,” Soares added. “Some of those houses — if you went to visit people, you walked up the back steps — you could eat off the stairs because people’s homes were immaculate.”

She described how fish vendors would come down the streets, ringing a bell and selling from carts. There was an ice cream man who would regularly sell in the neighborhood as well, she added.

“We also (had) the crab man that used to come,” Joanna Tavarez Fernandez said in an interview for the Stages of Freedom oral history project. “So we’d all be sitting outside with your newspapers, eating your crabs so you could just wrap it up afterwards.”

Several East Siders described Bates Street playground as well, a spot where kids would gather to play. “We had the pool and everything,” said Virginia Veiga, another former East Sider, in 2017. “We didn’t have to go to the beach.”

“We had markets, we had laundromats. We had things,” Deborah Young Tunstall, another participant in the Stages of Freedom oral history. “We were poor, but we didn’t know we were poor.”

She was a “lifelong resident of Lippitt Hill — what you call it,” Young Tunstall said. “The East Side is what I call it.”

The neighborhood was home to several social spots frequented by residents. The Holy Name Club, according to residents interviewed by Stages of Freedom, was owned by Cape Verdeans. The Celebrity Club, the participants added, was visited by celebrities from Fats Domino to Billie Holiday.

There were 52 Black-owned businesses in the community in 1949, according to the Stages of Freedom project. Naomi Jax-Brown, another participant in the oral history, said during the oral history project that her father owned one barbershop on Lippitt Street and two on Camp Street.

“We grew up with everybody,” said Veiga. “We all got along. It was peaceful, nice. (We) could go into the stores,” without fearing that she or her family would not be served because they were Black, she added.

There was a large push for urban redevelopment after World War II to beautify cities, and Providence was swept up by this movement as well, The Herald previously reported. Urban renewal was a process in which entire swaths of neighborhoods were bulldozed to make way for new development.

“When 70% of the houses in a neighborhood are substandard, and one in five of those houses is uninhabitable and all the signs of blight are to be seen in the area, there is only one recourse for the city,” said the broadcaster on WPRI’s “Lippitt Revisited,” a television special which aired in 1959. “And that is to demolish the houses by condemning the area.”

“They painted the whole thing as a slum,” Rickman said of the Lippitt Hill neighborhood.

“There is no guarantee that the residents of the Lippitt Hill redevelopment section will be able to move back into the neighborhood, even if they can afford it,” said David Joyce, administrator of the city’s relocation service at the time, because new landlords would be in charge of the area, the Providence Journal reported Feb. 9, 1959.

At an information session about the project, Joyce told a group of over 100 residents of Lippitt Hill — most of whom were being displaced by the project — that the “best potential” neighborhood for them to find different housing would be South Providence.

When Joyce opened up the event to questions, one resident said, “We as a people are tired of moving and we expect a certain degree of stability one day. We are tired of running and we have got to stop one day,” the Providence Journal reported.

On March 12, 1959, the PRA rejected a proposal which would prioritize “tenancy applications from present residents of the slum-ridden neighborhood” because of fears that this would “scare off” developers, the Providence Journal reported.

Buildings slated for demolition included a laundromat, a synagogue and several churches, including St. Hedwigs, a Polish Roman Catholic church that had been “a focal point of life for … Polish-speaking Catholics” in the area, the Providence Journal reported Dec. 6, 1959.

The Herald published an article entitled “Lippitt Hill Redevelopment” Dec. 2, 1960, which stated that construction and demolition of the neighborhood had begun in the spring of that year. The article reported that Matilda Litwin, area supervisor of the city's Division of Public Assistance at the time, said, “A community with slum areas and deteriorating neighborhoods suffers a three-way loss in the health and welfare of its citizens, its property values and in community morals.”

Lippitt Hill “in addition to its substandard housing has had inadequate recreational, shopping and other facilities that contribute to the type of social relationships and family life that we do not want for all residents of our city,” she continued.

In total, 650 units in Lippitt Hill were destroyed, with 450 of them — roughly 70% — occupied by non-white residents, the Providence Journal reported in 2017.

This displacement also occurred during a period in which housing discrimination and segregation were widespread, Ritchie added. People faced difficulties finding housing elsewhere and were generally unable to afford the prices offered in the redeveloped area years later. Residents were forced to move from mixed, integrated neighborhoods into more segregated ones, Ritchie said.

When the urban renewal project was initially in the works, the Providence Journal repeatedly reported on the difficulties of rehousing these 450 displaced Black residents.

“We found the problem of relocating our family more difficult than we expected,” said one resident who was interviewed for “Lippitt Revisited” in 1959. She spoke into a microphone, looking at the camera, as active construction and demolition took place in the background. “The racial issue was much greater than the economic considerations,” referencing difficulties in finding new housing.

“Failure to complete a rental agreement or a purchase was attributed most frequently to high rental or purchase price, discrimination and a lack of satisfaction with the dwelling or location under consideration,” the report said.

“After reviewing five excellent plans during the past three months, the Providence Redevelopment Agency has selected the University Heights plan as the most promising for the future of Lippitt Hill and the whole Providence community,” WPRI reported the week of April 15, 1962. “University Heights is a combination of the Star Market company and some 60 local citizens who represent the variety of the Rhode Island people.”

“The redevelopment agency is confident that this new neighborhood will be a source of pride to all Rhode Island,” the broadcast continued.

University Heights Inc. would “develop the 32 cleared acres of (the) Lippitt Hill redevelopment project,” the Providence Journal reported in April 1962. Along with housing, the development would include a supermarket and would strive to be a “cosmopolitan community.”

“There will also be no public housing on the site, and while the new corporation is determined to practice social integration, the scale of middle-income rents will keep much of the new housing beyond the reach of the Negro families who lived on the site before the land was cleared and who are of low income,” the article continued.

Antoinette Downing, prominent preservationist in Providence, advocated for historic preservation to be a key part of urban renewal, The Herald previously reported. But this same vigor for preservation was not brought to the Lippitt Hill project, according to Rickman.

The College Hill Study, compiled by PPS in the late 1950s, flagged the Lippitt Hill area as a “blight” that should see redevelopment rather than preservation, The Herald previously reported. Partially because there was no push from residents to preserve the homes in Lippitt Hill rather than demolish them, total redevelopment was the chosen option, Rickman said.

Ritchie teaches a research class that looks at the Providence housing ecosystem, development, displacement and gentrification. Her goal in creating the class was to tell the story of Mount Hope and to emphasize the value of remembering what used to be there. “People don’t know about Mount Hope,” Ritchie said.

Rickman stressed the importance of gathering first-hand accounts of life in Lippitt Hill at the beginning of the second session of the oral history project in 2017.

“It’s often fascinating to hear from the folks who were on the ground,” he said in the remarks, “who lived something.” 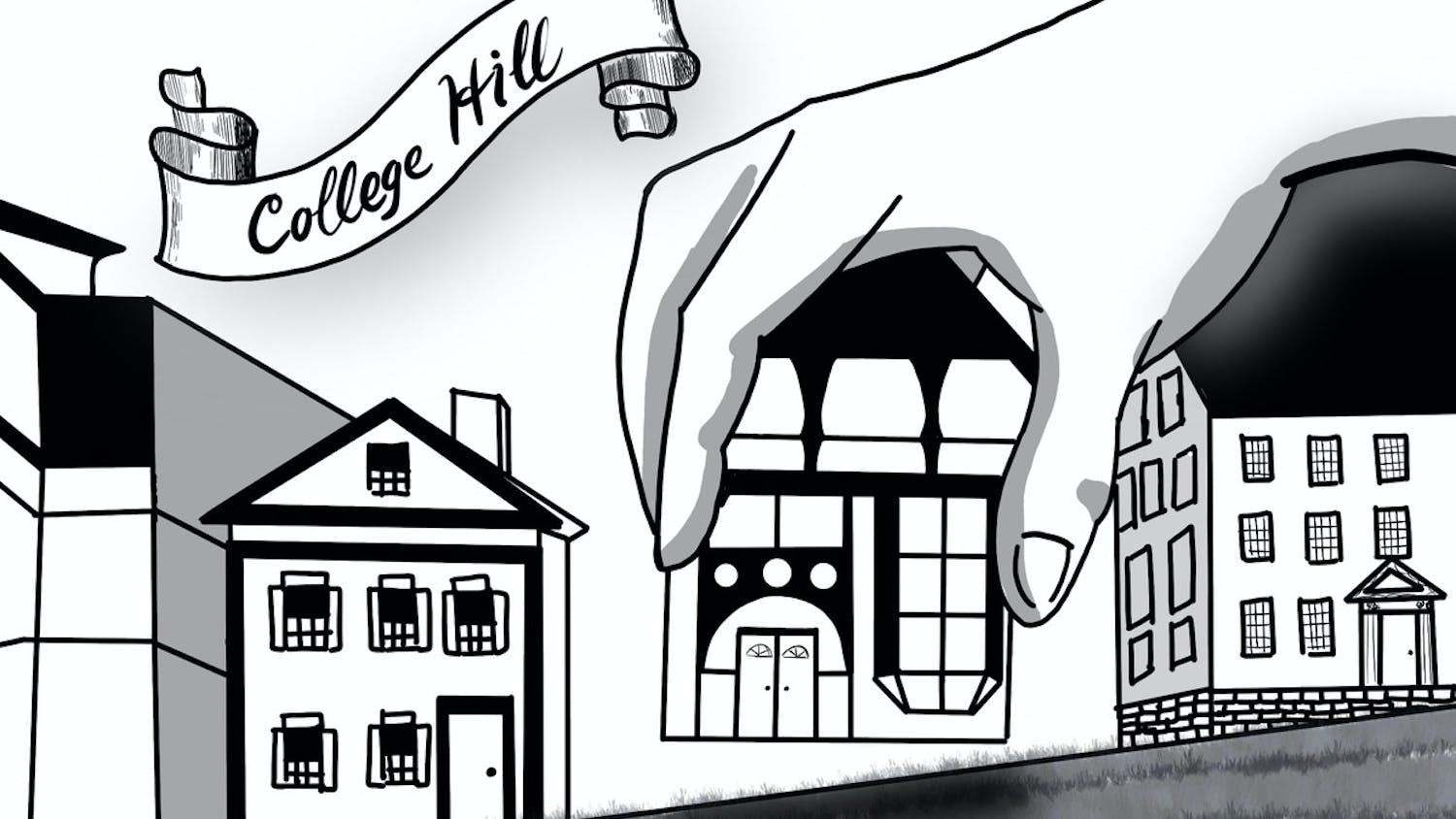