Skip to Content, Navigation, or Footer.
Join The Herald!
News

A memorable last couple of years in Brown athletics has seen more than 40 seasons canceled, 11 teams demoted, five reinstated, a pair of lawsuits, one new athletic director and half a baseball team moving to Florida.

Sure, in the fall of 2021, football quarterback E.J. Perry ’21.5 threw for 3,033 yards and soccer striker Brittany Raphino ’23 scored 11 goals, but the most extraordinary statistics — during one of the most tumultuous periods in the history of Brown University Athletics — came from off the field.

‘In the blink of an eye, it was all stripped away’: COVID sends athletes home

The upheaval began at 3 p.m. on March 11, 2020, an hour before Brown was set to host Virginia Tech in women’s lacrosse. The Ivy League presidents issued a statement canceling athletic practices and competitions for the rest of the academic year due to COVID-19. The game went ahead, with Brown upsetting the Hokies 13-11, but Brown wouldn’t compete in another athletic contest for over a year.

The next day, the University announced that all students, including athletes, would be sent home. The pandemic had reached campus.

The men’s basketball team had finished its regular season but was expecting to play in a national postseason tournament, according to co-captain David Mitchell ’22. “In the blink of an eye, it was all stripped away,” he said. “We didn’t know when we’d be able to see each other again, when we’d be able to play again.”

Women’s fencing team captain Anna Susini ’22 said that in the immediate aftermath of the shutdown, her sport became the least of her priorities. “I wasn’t thinking of fencing. I was just really in shock that I was going home,” she said. “I remember I got home and just fell into my parents’ arms and cried.”

But what followed the initial shock was the daunting challenge of maintaining a Division I level of training at home, in the middle of the pandemic, without knowing when the next competition would come.

First baseman on the baseball team Ryan Marra ’23 said he lifted weights in his basement and hit in a batting cage at a local field, counteracting the boredom of quarantine. “It was the thing that kept me active,” he said.

Mitchell said he also used a small weight set in his basement and went to a basketball court at a park, but after a few months his “mindset faded and deteriorated.”

“I honestly was saying, ‘What is the point of my training?,’” he said, thinking, “‘I’m not training for anything that’s going to come.’”

Basketball “wasn’t on my mind,” he added, and he began to explore other interests. An English Nonfiction Writing concentrator, Mitchell started keeping a journal and writing opinion pieces on news and sports. This experience inspired him to begin conceptualizing a senior thesis, which he eventually completed this April.

Captain of the gymnastics team Mei Li Costa ’22 said coaches gave the members of her team basic workouts to do, but they were based on fitness, rather than gymnastics. “It was the longest amount of time I’ve taken off gymnastics since I started,” she said, describing the time as a welcome break from intense training.

Sprinter on the men’s track and field team Jack Kelley ’24 was a senior in high school when COVID struck. Members of his team, he recalled, climbed locked fences that surrounded local tracks to try to keep training, and the police often came to kick them out. It “was a very weird thing,” he said. “The sport that’s usually a (source) of joy (was at the time) an illegal activity.”

Above all, he missed the team aspect of the sport. “When that was lost, it really didn’t feel the same at all.”

For some athletes, COVID’s upheaval of their sport was trumped by an even greater disruption — the demotion of their team through the Excellence in Brown Athletics Initiative.

On May 28, 2020, Susini had just finished a practice LSAT exam when she received an email telling her to join a Zoom call.

Expecting the Zoom meeting to be brief and straightforward, she hopped on.

It was indeed brief — lasting about 15 minutes — but the content sent a shockwave through the Brown athletic community.

“I was definitely just in shock,” Susini said. “I remember texting (my co-captain) and asking ‘Did we just get cut?’”

“I was totally wrecked and just laid in bed for several hours,” Susini said.

Kelley didn’t join the Zoom call, but saw that someone texted the news in a group chat with other incoming first-years.

He was in disbelief. “We hadn’t really been a part of this team and it was already over and cut,” he said. “It didn’t feel real.”

Kelley started to contact some of the schools who had recruited him before he committed to Brown and also considered taking a gap year and competing collegiately as an independent.

But with the help of parents and alums, the men’s track, field and cross country teams launched a coordinated and extensive effort to convince the University to reinstate the program.

Just under two weeks after the demotions were announced, President Christina Paxson P’19 informed the track, field and cross country teams that their varsity status would be reinstated, citing the programs’ diversity as an important factor in the reversal.

Other demoted teams were fighting, too.

Alongside a lawsuit from the squash teams alleging breach of contract, a June motion filed against the University argued the administration had violated the terms of a 1998 settlement with Brown that established requirements for female representation in athletics. With the reinstatement of the men’s track, field and cross country teams, the motion alleged, the gender balance among the athletic programs skewed too heavily male.

The lawsuit originally requested that the University completely reinstate the demoted teams, in the interest of restoring gender equity. But in a later settlement, both parties agreed to the sole reinstatement of the women’s fencing and equestrian teams, in exchange for an expiration date set on the consent decree.

Susini described the result of the lawsuit as “bittersweet,” given the fact that her team was reinstated while the men’s fencing team was not.

Kelley found that even after the track team’s reinstatement, some disillusionment with the administration lingered. “It was hard to be as excited about Brown athletics as a whole if you’re going to cut the program like that,” he said. “You can’t really undo what that means.”

‘I wish we got a chance to be able to do what we love to do’: Practicing without competition

The demoted teams, along with the rest of Brown’s club sports teams, could not officially practice for the entirety of the 2020-21 school year due to COVID-19 restrictions.

But even for the varsity teams, athletic practices were extremely limited.

According to fencing Head Coach Alex Ripa, the women’s fencing team’s practices were reduced to footwork outside on a grass field.

Mitchell said the men’s basketball coaches placed two outdoor hoops on the tennis courts and instructed players to practice shooting there, until the team was able to get back into the gym in February.

And while most conferences allowed for intercollegiate competition, the Ivy League canceled all competitions for all three seasons, though Brown was able to participate in a few events in late spring 2021.

“It was tough watching everyone play, knowing everyone is practicing,” Mitchell said. “It was great to be around the guys (at the outdoor practices), but it was just like, ‘Damn, I wish we got a chance to be able to do what we love to do.’”

Some athletes said there were silver linings in their seasons’ cancellations.

“I didn’t feel ready for competition,” Kelley said, adding that the team couldn’t access its track and sometimes had to run in the hallways. “Racing was such a foreign concept at that time.”

And for Susini, who had faced losing her program completely just months earlier, missing a season was comparatively minor. “Getting cut definitely put it into perspective,” she said. “After everything that had happened over the summer, I was like, ‘Brown can’t really do anything else to hurt me at this point.’”

According to Deputy Director of Athletics Colin Sullivan, Calhoun has prioritized the integration of athletics with the broader Brown community, pointing to a greater focus on club sports and recreational activities.

But Ripa said he has also noticed more concrete differences, noting that the administration now responds more quickly and that it has become easier to hold official visits for potential recruits or even take the team out for pizza.

Susini agreed, saying the new athletic administration has been more amenable to the team’s concerns. “They are definitely making more efforts to include us in the process,” she said.

‘I could see a light at the end of the tunnel’: Competition returns

“I was just elated,” Mitchell said of the announcement, adding that it gave him the motivation to get back in shape. “Knowing that I needed to get into that spot really inspired me,” he said. “I could see a light at the end of the tunnel.”

Kelley agreed, saying that during the fall 2021 semester, he regained the sense of community within the team that he had missed. “My drive was definitely rejuvenated,” he said.

For many athletes, time away from competition brought a renewed gratitude for their sport when they returned. “We all had a greater appreciation for being able to practice every day, be around each other every day, play every single game, go on the road trips, be in the hotels — all those moments that we had initially (taken) for granted,” Mitchell said.

“I was pretty tired and burnt out by the time our (2020) season got canceled,” Costa said. “So having that break was kind of nice to renew my love of gymnastics.”

Athletes also found other, more personal silver linings in the COVID break. For Costa, for instance, the pause was helpful for her in transitioning out of her sport.

Mitchell, also a senior, said he will take advantage of the extra year of eligibility the NCAA granted to athletes in light of COVID-19. While he can’t continue at Brown due to Ivy League rules, he said he is applying to other graduate schools where he could play on the basketball team while on scholarship.

The break from competition “was deflating, it was disappointing, but at the same time, I was able to grow as a person from this experience. I was able to do certain things that I might not have thought of before,” he said.

Even amid the turmoil her program has faced, Susini said she remains grateful for her experiences within athletics over the last two years.

“The prevailing emotion would be thankfulness,” Susini said. “The people who I’ve met at this institution and the people who I’ve been able to fence with have just been incredible and I know that those are friendships and relationships that I’m going to maintain for years and years to come.”

“That’s what being on a sports team is about,” she added. “I’m really thankful that … not COVID or the cut or anything else really took that away.” 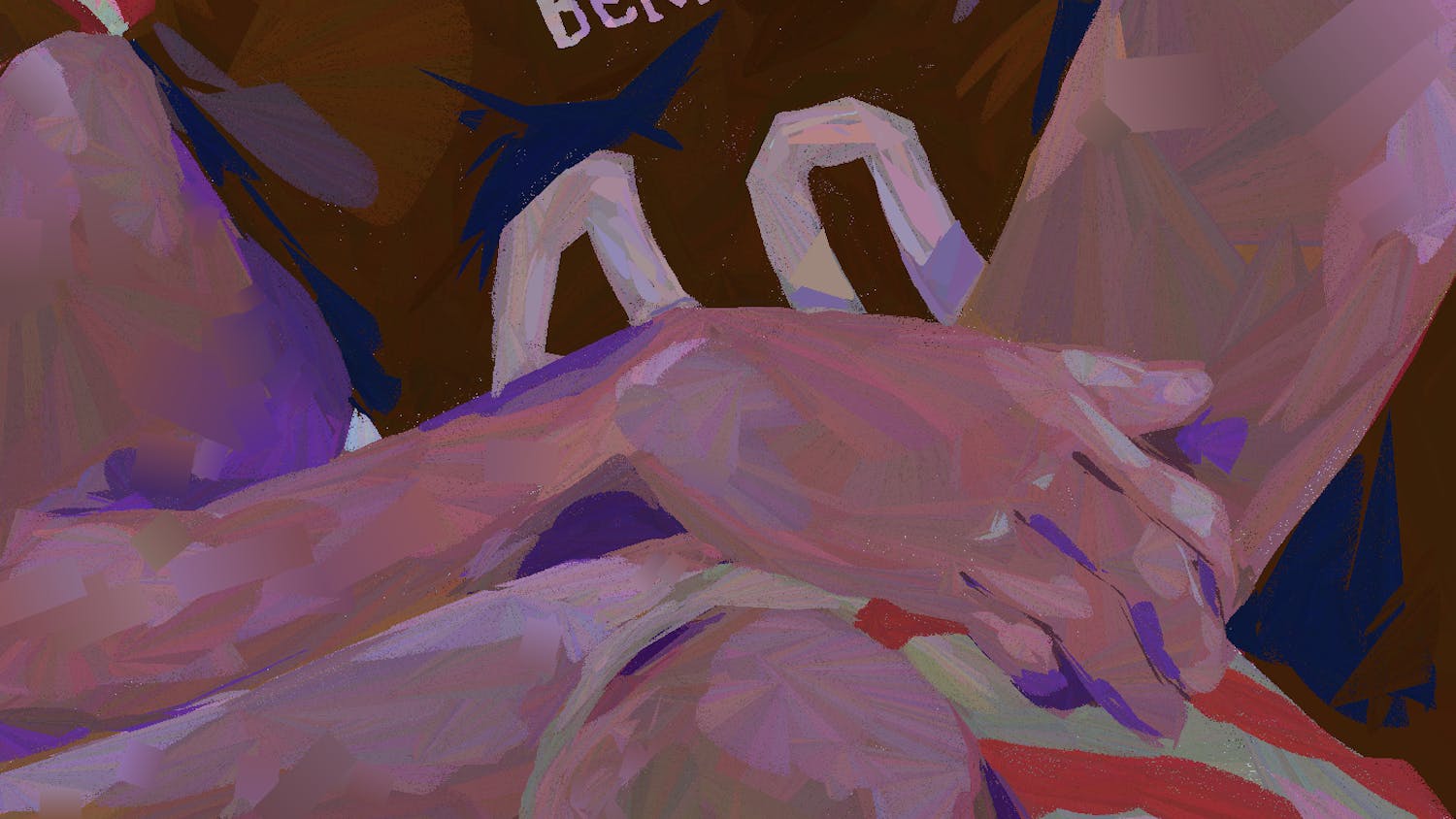