In February 2016, when University faculty members voted to rename the Fall Weekend holiday — known as Columbus Day until 2009 — to Indigenous People’s Day, members of the student organization Natives at Brown witnessed their advocacy efforts coming to fruition. This name change is one of the many reforms spearheaded by NAB, which has served as a cornerstone of advocacy and community for Indigenous students at the University since its founding in 1989.

Ma’iingan Wolf Garvin ’25, a member of the Hoocąk Nation and Bad River Ojibwe and NAB co-coordinator, characterized the organization as more of “a community … than a club.”

NAB “provides safe spaces for Indigenous students on campus to be together” through programming in the form of cross-cultural activities and workshops, she said.

Historically, NAB has been centered around “building community but also really pushing the University to listen to our needs,” said Kalikoonāmaukūpuna Kalāhiki ’24, who identifies as Kanaka Maoli, or Native Hawaiian.

Kalāhiki, who is a member of NAB and serves as a co-programmer for the Native Heritage Series at the Brown Center for Students of Color, said that these needs “are very distinct and unique because of our identities as Native and Indigenous Peoples living within the context of settler colonialism.”

Creating a safe community for students, current and future

Kalāhiki said that NAB aims to create a space for its members to honor their distinct identities as Native and Indigenous students from around the world while still building connections with one another. This can sometimes be difficult due to the diverse range of cultures that fall under the umbrella term of "Native," but by allowing members to share their backgrounds and experiences, Kalāhiki added that NAB has created a welcoming home and community for students.

“People do a really good job of talking from their own experience and clarifying what their positionality is,” Wolf Garvin added. “We always introduce ourselves at the beginning of NAB meetings by asking ‘Who are your people?’ and ‘Where do you feel your ancestral roots are?’ because we are all just curious and want to learn more.”

endawnis Spears, who works as the tribal community member in residence at the Native American Indigenous Studies Initiative, said that she commends NAB members on their efforts to plan initiatives for future generations of Native and Indigenous students, even if such efforts do not directly impact current students.

Relationship with the University

Kalāhiki, who previously served as a coordinator for NAB, said that they decided to step away from the organization’s leadership due to burnout. “I have taken on a lot of the (work) of trying to get the administration to hear our needs and to respect what we are saying and take us seriously,” Kalāhiki said. “Yet, it often falls on deaf ears.”

Kalāhiki referenced the University’s official land acknowledgement, which was formally established in May 2022, as an example of the University’s hypocrisy in its treatment of Indigenous students.

The land acknowledgment was developed by the Land Acknowledgement Working Group as part of the University’s five commitments to understanding its relationships with Indigenous communities, The Herald previously reported. The statement aims to “recognize, honor and create a meaningful acknowledgment of the Narragansett Indian Tribe and their connection to the land on College Hill,” according to the University's website.

NAB co-coordinator Abigail Alderman ’24, who is a member of the Cherokee Nation, said that while a small number of Native and Indigenous students may have played a part in developing the report, a majority of the Indigenous student community “watched (the report) happen with no input whatsoever.”

University Spokesperson Brian Clark wrote in an email to The Herald that “every member of the Brown community who wished to engage in the development of the land acknowledgment statement had the opportunity to provide input and perspective.”

Kalāhiki said that they feel that the land acknowledgment is “very performative because the University continues to be extractive of the local community and unsupportive of the Native student population on campus.”

The LAWG, formed in March 2021, was composed of University students, faculty and administration, including members of the Narragansett Indian Tribe, Clark wrote. After working to understand the relationship between the University, local Indigenous Peoples and the land that Brown sits on, the group made recommendations to the University, which were shared with the Narragansett Indian Tribe, other Indigenous Peoples in the region and the Brown community in February 2022, he added.

In May 2022, “following an extended opportunity for feedback and input” over the spring semester, President Christina Paxson P’19 responded to the recommendations and outlined a set of institutional commitments, including establishing a formal University land acknowledgment, Clark wrote.

Wolf Garvin credits fellow NAB member Sherenté Harris ’23, a member of the Narragansett Tribe who served on the working group, with taking on the brunt of the work engineering the land acknowledgment while receiving “no compensation from Brown.”

“Brown is on Narragansett land, so it was important that they had Narragansett people weighing in on” the statement, Wolf Garvin said. “But they placed so much of that work on Sherenté with no acknowledgement of it.”

In a response to a request for comment from the LAWG’s co-chairs Russell Carey ’91 MA’06, executive vice president for planning and policy, and Rae Gould, associate director of the Native American and Indigenous Studies initiative, Clark wrote that this was untrue and the LAWG’s faculty, staff and student members “collectively developed the land acknowledgement and all of the content contained in the recommendations document."

Harris wrote in a message to The Herald that they were “appreciative and grateful” to the University for forming the LAWG, as well as the working group for their partnership. At the same time, Harris thanked NAB and Decolonization at Brown for making the group’s work possible by advocating for the University to create factual land acknowledgments.

“The work of raising Narragansett visibility on and around Brown’s campus is my life’s work,” they added. Harris “chose to take on this activism work for my people (and) am incredibly grateful for the guidance and collaboration of my tribe, the Narragansett, through our chief Anthony Dean Stanton and our Medicine Man John Brown.”

The University’s land acknowledgment commitments also included establishing a residential program house for Native and Indigenous students during the 2022-23 academic year. This semester, NAB members succeeded in establishing an on-campus program house, House of Ninnuog, which means “house of the people” in Narragansett, according to Wolf Garvin.

Kalāhiki said that they felt the University was taking credit for the work NAB members had put in to establish the program house “after months of back and forth” with the Office of Residential Life.

“Everything that we have here as Native students is a result of Native and Indigenous students being so passionate about their community that they have forged these paths” themselves, Wolf Garvin added.

House of Ninnuog was previously disbanded due to a low member count as a result of COVID-19. Kalāhiki and Wolf Garvin initiated the process of its reinstatement in fall 2021 but “were told ‘no’ or ‘maybe’ or ‘maybe next year’ ” by ResLife, Wolf Garvin said.

To gain on-campus space as a program house and maintain access to a program house-exclusive lounge, library and kitchen, ResLife requires that program houses maintain a minimum of 15 in-house members, according to the University’s website.

Although NAB could not meet this requirement, members argued that “holding the cultural house of a historically underrepresented group to the same standards as other non-cultural houses such as Greek life (by requiring 15 minimum members) was a little bit irresponsible,” Wolf Garvin said.

ResLife did not respond to several requests for comment from The Herald.

According to Kalāhiki, the House of Ninnuog allows Native and Indigenous students at Brown a “space for us to live in the ways that make the most sense for us and that directly undermine the systems of power that we exist within.”

Wolf Garvin said that NAB members have found support with NAISI, a cross-disciplinary initiative made up of staff, students and faculty that aims to facilitate education on the cultural traditions, political histories and modern knowledge of Native American and Indigenous Peoples, according to the University’s website.

“When I say ‘the institution’ and when I say ‘Brown as a university,’ I honestly don't really count the folks who are in NAISI as part of that,” she said. “I commend (NAISI) for the support that they're able to offer us.”

Spears, who serves as a liaison between the Initiative and the Native American and Indigenous student community on campus, said that NAISI aims to ensure that Native students thrive on campus.

“I am here as a resource for (students) when they have specific questions or if there's a specific scenario they want to hash out,” Spears said. “NAB members have their own kind of power structure and they bring me in when necessary. If I'm not needed, then that's at their discretion.”

“They're a very vibrant and vocal group,” she added. “They're very grounded in cultures of activism and they are really good at enacting survivance on campus.”

Alderman said that she hopes NAB will “continue to be a strong group that is really passionate about what we do … (and will continue to) fight for our sovereignty and to decolonize this space and do our best in this very inherently colonial institution.”

Brown on track to double veteran undergraduate population by fall 2023 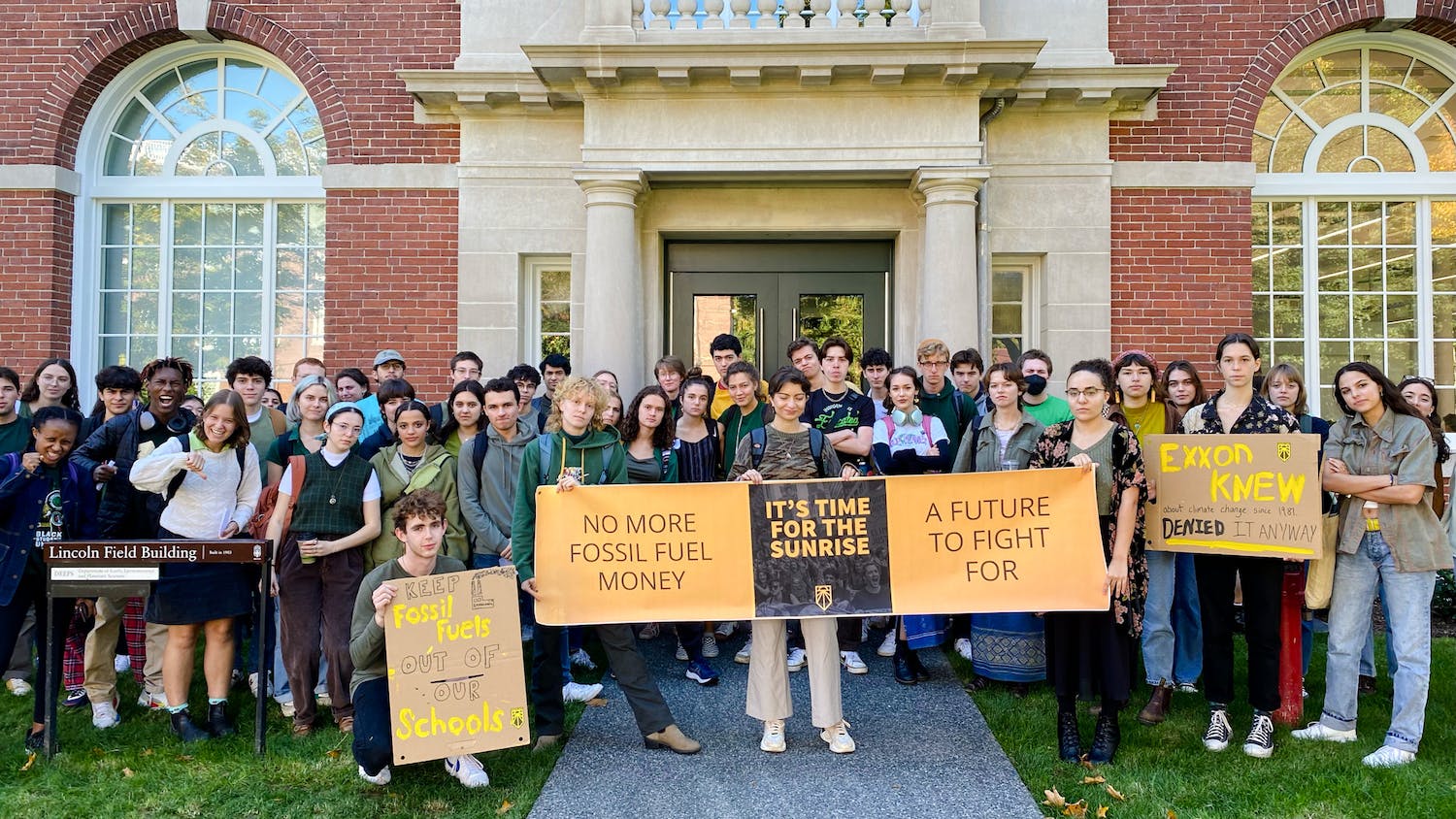