Quote of the week: “We actually read through the comments … and we listened." - Provost Richard Locke, on the Deficit Reduction Working Group's reconsideration of employee benefits cuts.

HITTING THE BANK, THEN THE BOOKSTORE:

Students handed over their last paychecks at the Brown Bookstore this week to shop for textbooks. The cost for all new books for a student taking four classes adds up to more than $500. While science courses have always had the reputation for expensive textbooks, humanities courses can be incredibly costly as well — chem concentrators can expect to pay $163 per class on average, while Italian concentrators will pay a cool $149. Though high textbook costs can dissuade some from taking a class, students often look online for a cheaper option. “I don’t need this $200 book for 13 weeks that I might not even use,” said Marques Love ’17. We think our wallets would have to agree.

Summer@Brown, a program in which 5,000 high schoolers eagerly pretend to be college students for a few weeks, generated $6 million in revenue this summer. Participants came from far and wide to spend time in Providence and could choose from more than 300 courses. Though many participants go on to apply to Brown, unfortunately for helicopter parents with big dreams of Ivy League children, Summer@Brown does not give an advantage in the admission process. 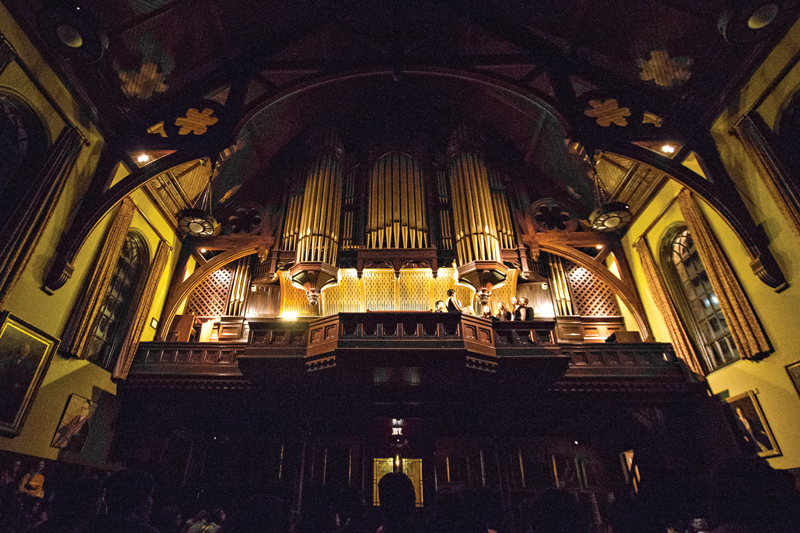 University Organist Mark Steinbach, the magician behind the Hutchings-Votey organ concerts, performed to over 500 undergraduates at midnight Monday morning. He spoke to The Herald on his music philosophy and future endeavors.

STEPPING DOWN, STEPPING UP:

Students Both Provost Vicki Colvin and Vice President for Campus Life and Student Services Margaret Klawunnleft their posts this summer. Colvin stepped down as provost after only a year on the job, and Richard Locke, director of the Watson Institute for International and Public Affairs, filled the vacancy. Colvin, who’s teaching CHEM 0100 this semester, made an impact at Brown by helping launch the Summer B-Lab, working to resolve the University’s budget deficit, and advancing art programs. But her successor, Locke, is pretty impressive himself, with a resume including overseeing the integration of the Taubman Center for Public Policy and fundraising over $35 million, just to name a few accomplishments. Klawunn left Brown after 19 years to head to California and become the vice chancellor of student affairs at the University of California at Santa Barbara. She oversaw a great deal of changes to student life, and our inboxes will forever miss her emails.

CRACKING DOWN ON DRINKING:

Some changes to Brown’s party scene might be underway, as the University has accepted all of the Alcohol and Social Event Review Committee’s recommendations. Last semester’s interim policy barring alcohol service in residential spaces remains in effect for this fall, while the rule of having University-trained bartenders prepare and serve drinks at all parties has been made permanent. The committee also recommended adding grad student staff who will foster more alcohol-free events on campus and adding a staff member whose job it is to meet with Greek life leaders. Students found violating alcohol policies will now face harsher punishments — the first strike for underage students found drinking will be writing a reflective essay, the second strike will be a semester probation and a “health education meeting” and the third will be a dean’s hearing.

The Mental Health Community Council made several proposals to expand the impact of Counseling and Psychological Services, including eliminating the current seven-session limit of CAPS therapy, increasing the number and diversity of CAPS staff members, and revising the medical leave-taking system. In addition to moving CAPS under the umbrella of Health Services, the University also hired its first student care coordinator to help students in the transition between CAPS providers and other Providence providers. Existing CAPS staff members have also extended their hours to create more appointment slots for students. The council also recommended more training for students, faculty members and staff members on how to direct individuals to mental health resources.