Arielle Nitenson ScM’15 MAT’16 PhD ’17 timed her pregnancy for the last year of her doctorate in neuroscience to best coincide with her studies.

“We had heard that having a kid or being pregnant in the last year of grad school is a pretty good time, because there’s never a good time to have a kid, but at least at that time you’re done with coursework,” she said. “You’re usually doing more writing for your dissertation.”

But even with this planning, her pregnancy posed challenges for her academics, Nitenson said. “I had really bad morning sickness and I really struggled to do a lot of my experiments with my nausea,” she said.

Yet through these challenges, Nitenson said that she felt supported by Brown’s financial support programs as she started her family.

“All of our programming supports a graduate student, regardless of” their gender identity, Ryan said. “We’re also adoption- or birth-inclusive. Our policies support any family-building in any capacity.”

Following the 2016 recommendations, Brown created a parental relief program that offers graduate student parents a full semester of parental leave. Through the program, the University continues to pay all stipended MFA and PhD students and pauses all academic requirements while they are on leave, Ryan said. A year and a half ago, the University further expanded the program to cover both parents if they are both Brown students.

Ivana Petrovic ScM’13 PhD’18 had her child in 2017, just after the parental relief program was established. She said she found life as a new parent to be “all of a sudden a whole different world” but felt that the relief program really helped her through the variety of unexpected challenges she faced.

“Something had changed and for me, it was really hard to focus on work,” Petrovic said. “Of course, part of it had to do with waking up at night to feed my child, but the other part was something that I wasn’t expecting, which was that my brain naturally was thinking about my child. It just felt really hard, and that was something I wasn’t really prepared for.”

Nitenson, who defended her PhD while eight and a half months pregnant, said that taking parental relief between her defense and graduation gave her flexibility and time to care for her newborn daughter.

“Other than doing a little bit of teaching, I didn’t actually start my job until my daughter was six months old,” she said. “I had a substantial amount of time for maternity leave and that was just really, really valuable.”

Elsie Gibson GS, a third-year PhD candidate in computational biology who had her son in April, feels that conditions would have been much more difficult had she been in an industry job, given the “absolutely abysmal legal standards in (this) country.”

“I feel really grateful to be at a university and get a full semester of leave,” she said. “I really needed the full three or four months.”

Avery Morrow GS, who is currently on six months of parental relief following the birth of his daughter, said that the time off is helpful, as he would otherwise struggle to balance conducting research and caring for his daughter.

“I thought I would have time to work on research, and that’s really not the case when you have a three-month-old baby,” he said. “You get little one-hour breaks here and there during the day, and that’s kind of it.”

While parental relief has paused Morrow’s academic responsibilities, he said that he is unsure of what will happen when he returns to school next semester and can’t stay home with his daughter.

“Up until now has been the easy part for me. I feel supported, both by the union as well as by the administration, which has given me the entire semester off, paid, which is fairly rare among universities in general,” he said. “But I don’t know what’s coming next.”

When Morrow returns to school in January, his daughter will be six months old, young enough that she will still need constant care, he said. For Morrow, finding affordable child care has been difficult.

Brown also has a partnership with the Brown/Fox Point Early Childhood Education Center, Ryan said. The maximum tuition at Brown/Fox Point is $1,458.34 per month, although the center offers financial assistance as allowed by its budget, according to the center’s website.

Nitenson said that while finding daycare was difficult, the child care subsidy helped her family afford the associated costs.

“Luckily between the $4,000 child care subsidy plus working at a job that was making slightly more money, we were able to afford child care just fine,” she said. “But for two grad students on a grad student salary, I don’t know.”

Morrow, who lives in Boston and commutes to Providence, said that the subsidy would cover just over a month of child care expenses.

“The only thing that’s available to us is $3,000 a month,” he said. “If we can’t find something else, we’re going to have to start pulling strings with family members, seeing who’s willing to quit their job. We can hire a nanny for some days. It’s going to be very complicated.”

But working an extra job to cover child care costs is not an option for all graduate students. Mirjam Paninski MA’20 GS, who has two children aged four and six, said that covering child care expenses has been especially difficult for her family since both she and her husband are international graduate students at Brown.

“International grad student parents are not allowed to make any additional money from what Brown is giving them,” she said. “I don’t think that even residents or green card holders or American grad student parents should work beyond what they’re given, because grad school itself is already so challenging.”

Having chosen Brown partly for its culture of supporting graduate students with families, Paninski was not prepared for the challenge she has faced in covering child care costs in the United States, and said she believes that more support from the University is necessary.

Throughout the admissions process, “Brown and the grad school were quite prominently featuring graduate student parents and the child care subsidy, so we did think there would be a little more support,” she added.

Morrow said that he expects to encounter difficult decisions between prioritizing child care and his own education. As a Boston resident, the process of actually getting to Providence takes additional time away from both Morrow’s studies and his time with his child.

“Every added day that I go into Providence is adding several hundred dollars per month to the price” of child care, he said. “I’m anticipating some difficult juggling next semester.”

The University covers 75% of healthcare costs for children and spouses of graduate students on Brown’s health insurance, Ryan said.

“That’s a really transformative difference because if you have a spouse and a child, health insurance is going to be a significant cost,” she added. “If we can cover 75% of it, that’s a big lift to creating a healthy family.”

Nitenson said that while expensive, adding her daughter to Brown’s health insurance paid off.

“When we had our daughter, I think we owed the hospital like a hundred bucks,” she said. “That was it.”

Morrow said that while he was unable to add his daughter to his Brown health insurance plan this year, he hopes to do so in the future because it provides more benefits than his wife’s plan.

Brown’s support programs for graduate student parents are meant to show students that they don’t have to choose between academics and life milestones, Ryan said.

“When a PhD student is here for six years, we need to make sure that their life and their studies can be supportive of each other,” Ryan said. “You don’t need to pause your life while you’re a graduate student.”

Nitenson said that she was initially concerned about being able to have children while in grad school.

“One of the fears that I had even going into grad school was spending a good portion of your childbearing years in school,” she said. “I remember being worried at some point about having that first kid. You don’t want to start to get too old for that.”

“When PhD students are considering an institution, we want them to think of Brown as a family-friendly place,” Bernstein said. “Sometimes the distinguishing characteristics between institutions may be few. We believe that this is an area that Brown stands out in and is actually leading in terms of graduate student parental support.”

Nitenson said that Brown’s encouragement of graduate student parents was one of the reasons she and her husband chose Brown.

“Even when I was interviewing for grad school, one of the reasons why I wanted to go to Brown was that there were people that were married, that were in serious relationships, that had children, that had a life outside of just school,” Nitenson said. “They seemed just as connected as everyone else.” 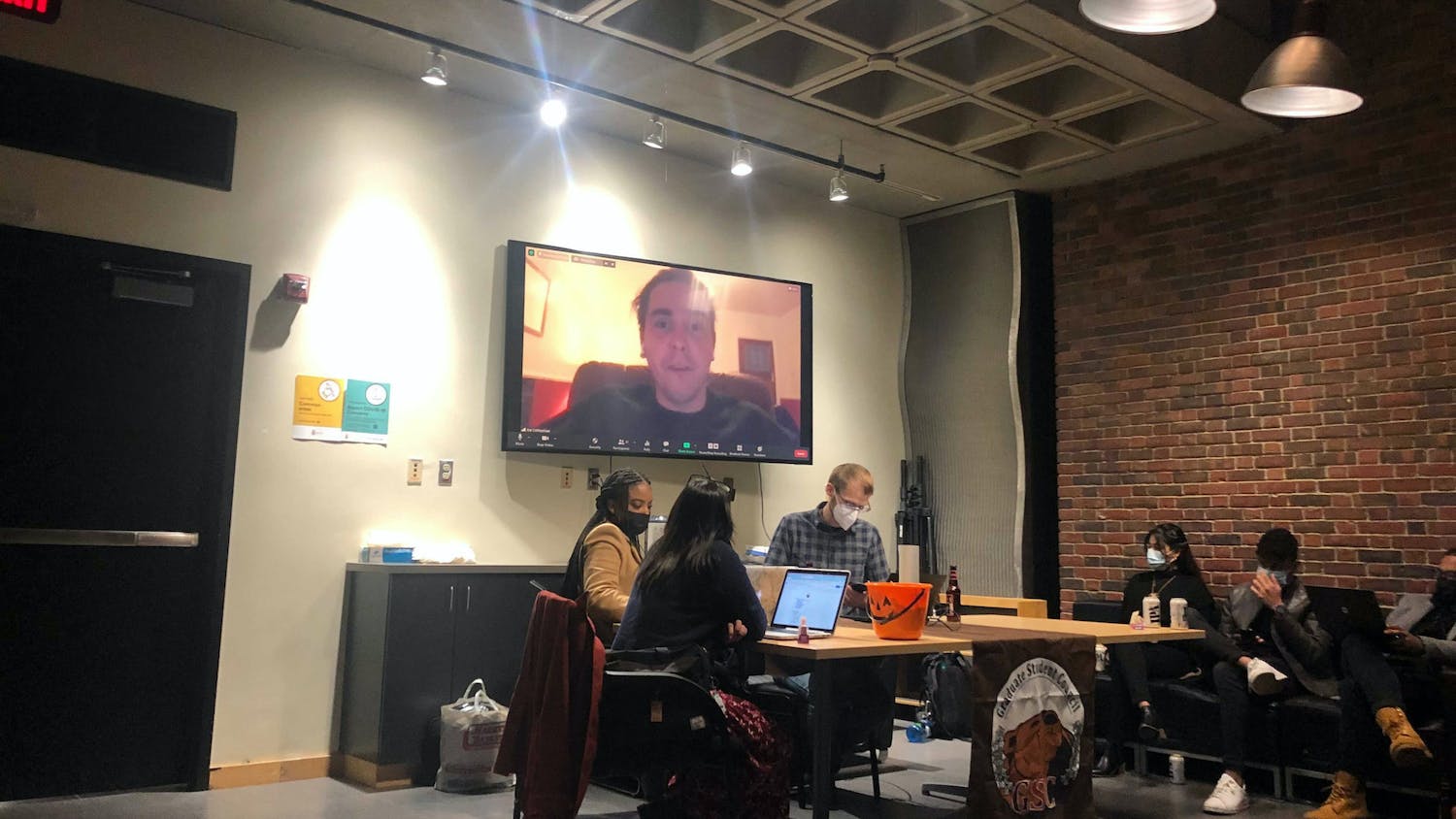